The generation of energy by fossil-fuel alternatives such as wind and solar power is becoming more and more practical. A major hurdle in switching to alternative energy sources is that many of them, such as wind and solar power, are intermittent. Methods for storing energy during times of surplus production, to be used when demand exceeds supply, is an essential part of an alternative energy economy. Much scientific and engineering effort is going toward this goal.

The small town of Kankaanpää, Western Finland, and the Drake Landing suburb of Okotoks, Alberta, Canada have something in common: they are sites of new methods of mass energy storage. At each of these places, heat generated from alternative energy sources is stored by unusual, but slightly different means. While construction of the site in Finland is just finishing, the project at Drake Landing has been providing heat to the homes in that district for more than 15 years. The two projects are part of the development of storage systems for energy generated by alternative methods.

The largest contribution to energy storage by any method, globally, is made by ‘pumped hydroelectric’ storage.

In this technology, when the electrical grid produces more power than currently needed, the extra energy is used to pump water into a reservoir situated uphill. And when electrical demand is high, the water is released through turbines in a power station to generate electricity. Pumped hydro has been around for a long time and it works — engineers refer to it as a fully mature energy storage system.

Pumping stations are part of both the Canadian and American hydroelectric developments on the Niagara River near Niagara Falls. A new, massive example of pumped hydro storage is located near Porto, Portugal. This project consists of a series of dams, pumps, reservoirs, and generating machinery. Energy from offsite wind energy plants is used to pump water up to a high reservoir. The reservoir is effectively a large physical ‘battery’. The discharge of water from it through turbines generates electricity when it is needed. This development will eventually include a new wind farm.

A proposal for the Hoover Dam in the American West, which is faced with a water shortage, is to ‘recycle’ the water passing through the dam’s generators, using alternative energy sources (wind, solar) to pump downstream water back up to the reservoir. This project, still at the proposal stage, would present a number of problems, including to the users of the Colorado River downstream.

Although pumped hydro is effective and works well on a large scale, it has several disadvantages, beginning with the high cost of building it (the project in Portugal has a price tag of about $1.6 billion US; the Hoover Dam proposal is currently estimated at about $3 billion). Also, such projects can only be constructed in certain places, since they require an elevated reservoir and a lower outflow. They can damage topography and environments.

The projects in Kankaanpää, Western Finland, and Okotoks, Alberta, although miniscule compared to existing or proposed pumped hydro systems, have the advantage that they are simple and can be implemented almost anywhere.

The Finnish project consists of a large round silo (pictured at the top) containing 100 tonnes of ordinary sand. Electricity from a wind-powered source is used to heat the sand to a very high temperature (500ºC) and that heat is withdrawn when demand exceeds supply from those sources. This energy can be used for heating or to generate electricity.

The system in Alberta consists of 144 holes, 37 meters (120 feet) deep, into which are placed U-shaped tubes for circulating water. The tubes are connected, and about 2.25 meters apart. Water heated by solar energy collectors is pumped into the bore holes, and in times of need, heat is extracted by a reversal of this process. Remarkably, although it is in the Canadian midwest, which is not known for its mild weather, the project provided over 90% of the year-round household heating needs once it was fully charged with heat (which took 3 years). The picture at the top shows the field under which the system of bore holes is located; the installation is about 35 meters in diameter, and does not appear to be disrupting the surface field. In contrast to the project in Finland, however, this system does not provide high enough temperatures to generate electricity.

Other Methods of Energy Storage

Many systems for energy storage have been explored. They include mechanical, chemical, and electrical methods, in addition to the those described above. The various methods have different associated costs and are at different developmental stages, as shown in the graph.

Interestingly, the two methods just described (sand and earth heating) are not on this graph, which was created some six years ago. The methods shown in the graph differ in terms of their capacity for storage and the time range over which they are useful. Some of the highest storage capacities practically available, and longest storage possibilities, are for hydrogen and methane generated with alternative electrical energy: these sources most closely resemble current fossil fuels, which of course owe their popularity to just such properties (high energy density, stability).

‘Gravity batteries’, including pumped hydro, store energy by moving a large mass of matter uphill during excess energy availability, and letting gravity drive energy production during times of need. The use of heavy, electrically driven rotors to store kinetic energy and release it as needed has also been explored (‘flywheel’). The storage time for some methods, especially those that store energy kinetically, is relatively short.

Electrical batteries offer a mature technology for energy storage. This approach has recently gained momentum with large developments such as the ‘Pillswood Project’, located in East Yorkshire, UK. This battery station will help balance power needs for the area. It is designed to hold enough energy to power 20,000 households for a day, using batteries built by the Tesla company. Such systems, based on Tesla batteries and others, are already in operation in several locations.

It is useful to compare the scale of an energy storage system to the daily household use of electricity. In North America, the average domestic electricity consumption is just under 30 kilowatt hours (30 kWh) per person per day. The average for Austria, Belgium, France, Netherlands and Germany is 19 kWh/day. How does this compare to the capacity of existing batteries?

The capacity of conventional, ‘small’, car batteries is modest, typically around 1 kWh or less (which could run the large element on an electric stove for about an hour). Lithium ion batteries found in electric vehicles have a much larger capacity, up to 100 kWh for the Tesla Models X and Plaid. If such a battery were reversibly connected to the electrical grid, it could effectively buffer energy needs for a household (in America, for a household of 3 people, 90 kWh per day). Alternatively-generated energy, either from the grid or the household itself, would be used to charge a lithium ion battery. During high demand, the energy from the battery would feed back into the grid, or the household. But the technology for this with electric vehicles remains to be developed.

A challenge presented by today’s batteries is that they require some combination of exotic and toxic chemicals. Producing them often requires dangerous mining, or mining in environmentally sensitive or politically unreliable locations. Batteries with alternative chemical bases are in development, including ones that use a molten sodium – sulfur technology. Again, sophisticated and robust technology remains a challenge.

Although these various technologies offer a way of ‘levelling out’ electrical energy needs and production, alone they would do little to alleviate our damaging addiction to fossil fuels and the related production of greenhouse gases, which is already making the world a less hospitable place. (Scientists tell us that further global warming is already ‘baked in’; we can only try to ameliorate even worse conditions in the more distant future.) The reason is that domestic electrical consumption is only a small fraction of our total energy use.

The average use of domestic electricity in America is about 30 kWh per day per person, and alternative energy sources and storage systems can greatly reduce that number. But the total energy consumption per capita in North America is a massive 250 kWh per day! In other words, even if the alternative forms of electrical energy production and storage described here replace fossil fuel-driven electrical plants, this would reduce total energy consumption by only about 12%, under current conditions. The energy diet in Europe is less, but still large: about 125 kWh per day. There is no doubt that our profligate energy use will need to be diminished. 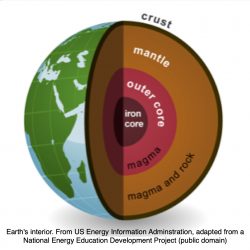 The Great Common Sense of SEWTHA