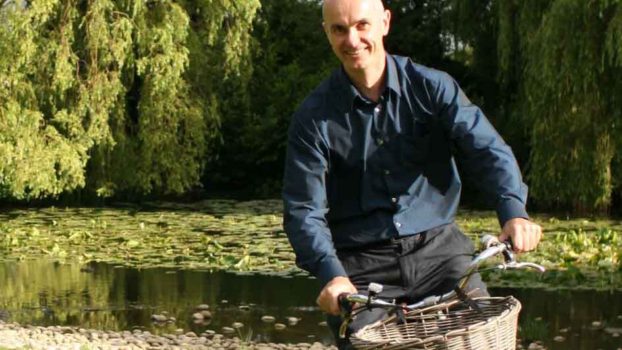 The acronym SEWTHA stands for the title of the book ‘Sustainable Energy: Without the Hot Air’, written by the late Sir David MacKay (above, on his bike), who was a physicist profoundly interested in the energy future of the world. In SEWTHA, he uses the physicist’s toolkit to analyze how much energy we use, how we obtain it, and, most importantly, how we can replace our current use of fossil fuels with sustainable energy sources. MacKay wrote “We need numbers, not adjectives.,” and that’s the theme of the book, which you can see and download for free (you can also order a hard copy, or the Kindle version, on that site or at Amazon). MacKay died in April 2016 at just 48 years old. There’s an excellent account of his contributions in an obituary in The Guardian.

MacKay was an uncommonly active physicist: in his too-short lifetime he contributed to physics, mathematical science and information theory, he invented a text inputting device that depended on eye movement to aid the impaired, he was an advisor on energy and climate change to the British government for five years, he helped absolve a woman of being found guilty of a murder she didn’t commit, and that’s just a partial list. But the contribution that gained him the most public recognition, and that arguably has had, and is having, the greatest impact, is SEWTHA. He first paid to self-publish it, but it became so popular it has sold 40,000 hard copies and has been downloaded almost half a million times from the web site.

We have an energy problem

The crux of the energy problem is illustrated by a graph from SEWTHA, which reflects our exponentially rising consumption of fossil fuels by showing the rising concentration of atmospheric CO2 over the years:

Things are changing rapidly, and the question is, how can we adjust to the changes that threaten to cook the world under a blanket of greenhouse gases and simultaneously exhaust fossil fuels? MacKay calculates how much we can reasonably expect from various alternative energy sources, and where our energy is being used today. He does all of his calculations in units that the average person can recognize — the kilowatt-hour, the kWh (a 40 watt bulb burning for one day uses about one kWh). He puts the calculations in separate chapters in the back half of the book to keep the text easily readable. If you want to check the calculations and the original data, fine, but you can also just take his word for it. He’s a really smart guy, and doesn’t have any axes to grind.

The great thing about MacKay is that he doesn’t say, “you must do this, you must not do that.” He draws up the possible scenarios for energy production from non-fossil fuel sources, and tells you what the limits are. For alternative energy generation, he takes into account solar, wind, geothermal, and various forms of water energy — hydroelectric, wave motion, and tide. He also considers nuclear energy as a non-CO2 emitting energy source, and says “I’m not trying to be pro-nuclear, I’m just pro-arithmetic.” The results are unsettling; basically, we can’t replace the current use of fossil fuels with anything reasonable unless we make sacrifices, which could include vegetarianism, smaller houses, less travelling, and living among solar panels, wind turbines, and possibly nuclear plants.

Where will the energy of the future come from?

MacKay’s concludes that you would have to cover an area of Britain equal to the size of Wales with wind turbines to produce enough energy to sustain the country at its present level of consumption. Or, you could cover an area half the size of Wales with solar panels. You might argue that the increasing efficiency of solar panels, for example, means we could do it with a lot less coverage in the future. You’d be wrong. It’s in the physics — there’s only so much solar energy to be captured. Same for wind.

Creating massive photovoltaic solar farms in sun-rich areas to generate electricity would be one way to provide enough renewable energy for our voracious appetite. For North America, southwest USA comes to mind. How big a solar farm would be needed to provide all North and Central Americans  with the amount of energy currently used by citizens of the USA and Canada (250 kilowatt hours a day)? Using the most cost-effective system (lens or mirror concentrators), the solar farm would have to be 600 km on a side, 360,000 square kilometers in area. About the size of New Mexico, completely covered in solar panels. Flat solar panels are more efficient at collecting energy, by about a factor of 2-2.5, but are more expensive to put up. To power only the USA at 250 kWh per day per citizen using the more expensive flat panels would “only” require covering about 83,000 square kilometers, about the same as the state of South Carolina. That yield would be close to the theoretical maximum; you can only capture a fraction of solar energy using the physics of photovoltaics.

If this seems a little impractical, check out MacKay’s various scenarios for how we can combine reduced energy consumption with alternative sources to sustain human life. It’s not going to be easy, or fun. 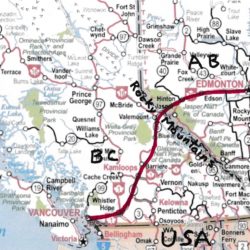 Using Numbers Instead of Adjectives to Evaluate an Economic Decision 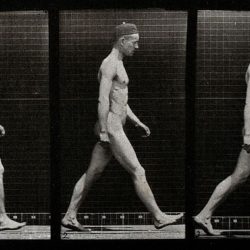 Save the Environment — Drive a Car, Don’t Walk 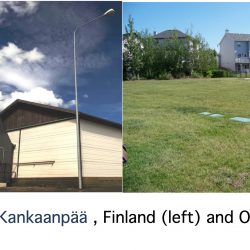 Storing Energy to save earth