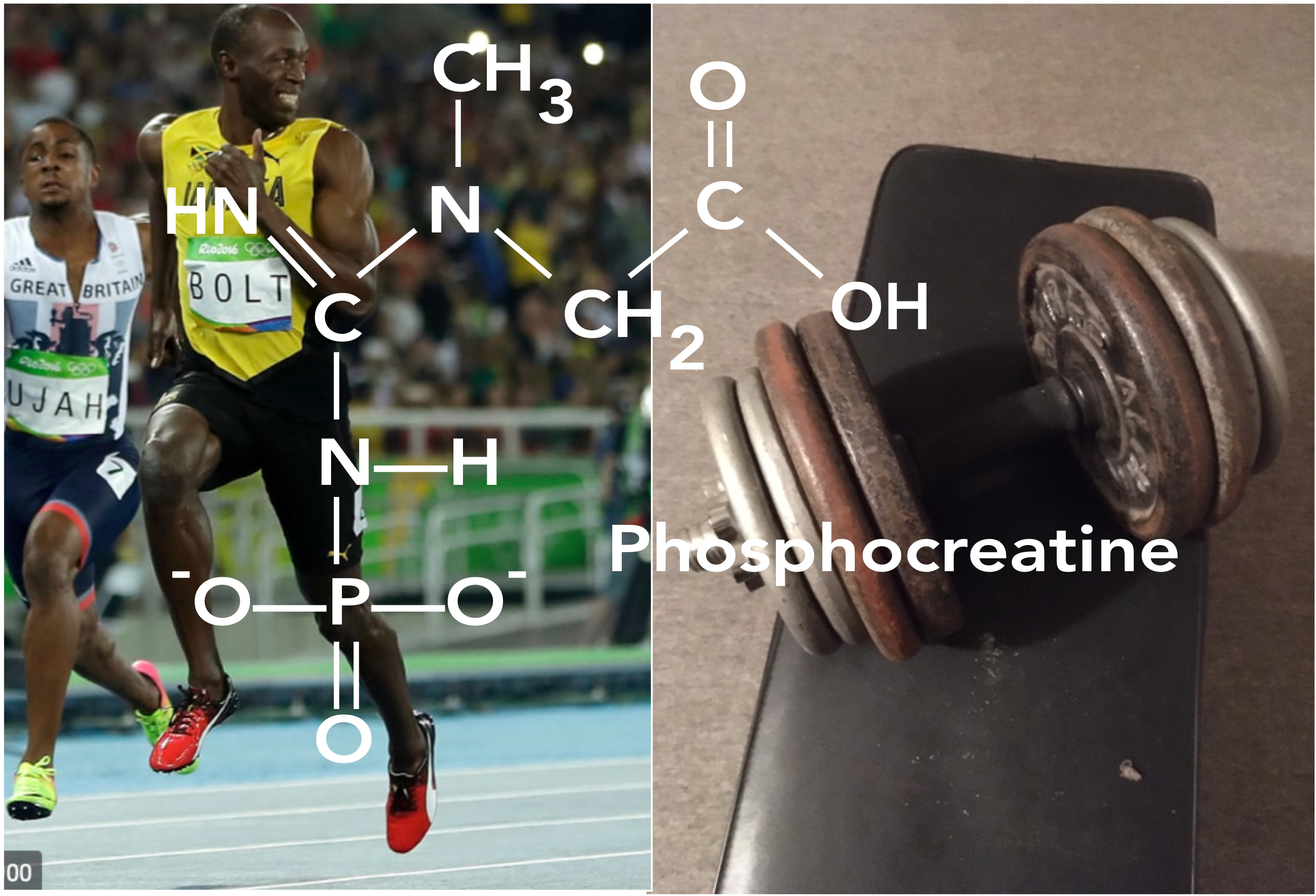 You need creatine. For every move you make. But that doesn’t necessarily mean that you need to take creatine supplements. The questions that arise include: does creatine supplementation improve athletic performance? is it safe? how does it work? The answers are, respectively, sometimes, but it depends; probably yes; and, it’s complicated. This post looks at some of the nuances.

Supplements are a huge industry; the market in the USA alone is estimated to be over 30 billion dollars a year. Vitamins are a huge part of that, but there are numerous other products that are claimed, or hoped, to improve our lives, These include protein supplements, minerals such as iron and magnesium, and, at number 11 on the list for the US, creatine (1).

Many studies have analyzed creatine’s effects on athletic performance. The best-supported conclusion about its effects on performance is that taking creatine can improve activities that depend on short-term, explosive, muscular action. Results that are summarized in a recent meta-analysis (i.e., a paper that summarizes previous work of good quality) (2) include the following:

On balance, the evidence shows that creatine can increase muscle strength and capability for greater bursts of anaerobic activity, such as weightlifting and sprinting. It probably doesn’t affect athletic performance of long duration. And, although the short-term performance of many athletes is improved, some are not helped, maybe because they already have high levels of creatine in their muscles (2). Muscle creatine mainly comes from synthesis in the liver of about 1 gram a day, and dietary sources, particularly meat. Vegetarians take in less creatine from their diet and may therefore experience more of a boost from supplemental creatine, particularly as compared to athletes who have a meat-heavy diet.

Most published studies of creatine effects on athletic performance have concentrated on athletic males. But there is evidence that women can also undergo an increase in muscle strength after creatine supplementation (4).

The effect of extra creatine on performance can be understood by looking at the energy metabolism of skeletal muscle. All muscle contraction, in fact, almost all energy-requiring processes in the body, depend on the energy released by the hydrolysis of the molecule often called the ‘universal energy currency’, ATP (adenosine triphosphate):

The release of the terminal phosphate group (Pi) of ATP to produce adenosine diphosphate, ADP, is what thermodynamicists call a spontaneous reaction: it runs to the right, as written above, and releases energy. Reaction (1) can be carried out in a test tube by adding a particular enzyme to it (an ‘ATPase’; something that hydrolyzes ATP). In that case, all of the energy released is given off as heat. But the contractile complex in the muscle uses most of the energy released by reaction (1) to drive the contraction and relaxation cycle of the muscle fibres (a little energy is always ‘wasted’ as heat in any reaction).

When Usain Bolt used to thunder down the 100 meter track while setting new world land speed records for human propulsion, ATP fueled his muscles, being converted to ADP at a tremendous rate. But the ATP in his leg muscles would only propel him for about a second or two. Fortunately, there are backup systems to take him the full 100 meters.

The most immediate supply of additional energy in the muscles is the molecule phosphocreatine (or creatine phosphate, if you prefer). Phosphocreatine is the ‘high-energy sister’ of creatine. It’s creatine with a phosphate group (Pi) attached to a nitrogen at one end of the molecule, as shown at the top of this piece. Most molecules of intermediary metabolism (the complex business of the hundreds of biochemicals and thousands of arrows connecting them) have more than one function. But the only role of phosphocreatine is to restore ATP, and it does this instantaneously when ATP begins to be used, as in muscle contraction. The phosphocreatine phosphate is then transferred to ADP, restoring ATP:

Phosphocreatine is like the backup battery attached to a smartphone, which constantly pumps its energy into the working battery as it drains. As long as phosphocreatine is available, there will be ATP. The critical feature is, that phosphocreatine has even more energy in the link to its phosphate group than ATP does, so it can drive reaction (2) far to the right. In other words, it converts almost all (all would be thermodynamically impossible) of the ADP to ATP, to be used for further muscle contraction.

Increasing the creatine concentration in muscle cells by taking it as a supplement increases phosphocreatine as well, since the two are in equilibrium (5), and this is undoubtedly why creatine supplementation can enhance short-term, explosive, activity, like weight lifting.

As muscle is furiously working, the concentration of ATP doesn’t decrease much until exhaustion; it’s being replenished at the expense of phosphocreatine, with backup from another energy-producing system, glycolysis.

The second and third backup systems

Glycolysis, the anaerobic (oxygen-independent) conversion of glucose to lactate is the next system that provides ATP to the working muscle. Glycolysis kicks in after just a few seconds of muscular effort, and it produces ATP from ADP by a metabolic scheme that effectively reverses reaction (1), although the biochemistry is a little complex. Beginning with glucose, glycolysis produces pyruvate, which is converted to lactate under anaerobic conditions. Glycolysis is also a thermodynamically favourable scheme, and the energy it releases is used to convert ADP (plus Pi) to ATP.

When the rate of ATP consumption goes down, when most sprinters are gasping for air (not so much Usain Bolt; he takes a leisurely spin around the track), an oxygen-requiring, even more complex scheme kicks in to restore resting ATP levels. Aerobic energy metabolism converts the pyruvate produced by glycolysis to carbon dioxide.

Aerobic energy metabolism uses a wide variety of products of food digestion, foodstuffs, to produce the bulk of ATP needed by living organisms. It regenerates the ATP used by reaction (1) during the contraction cycle of muscle. But it is too slow to help Usain Bolt reach the finish line, or the weightlifter to grunt his way to a personal best lift. The beauty of the aerobic energy-producing scheme is that it can use “other stuff”, carbohydrate products such as pyruvate, but also the breakdown products of fats and proteins, to produce ATP. The scheme was apparently invented once in biological history, and is so good it exists in essentially all living cells to this day.

Although phosphocreatine and ATP provide energy to a hard-working muscle at a very high rate, they are a limited supply. Usain Bolt reached a top speed of 47 kilometers per hour (29 mph) during his historic 100 meter run at the World Athletics Championships in Berlin in 2009. At this speed, with a large enough supply of phosphocreatine, an elite runner could run a mile in about 2 minutes, and the marathon would take a top performer like the Kenyan Eliud Kipchoge under an hour. Of course, nobody can do that, and no normal human ever will — the best runners in the world take about twice as long to run those distances, because most of their performance is powered by aerobic energy metabolism, and that can’t provide ATP at the rate required to run 100 meters in 9.58 seconds.

Phosphocreatine is used by a hard-working, iron-pumping muscle to keep ATP levels up (reaction 2), and the level of creatine in the muscle cells goes up because of that. After the race, ATP produced by aerobic energy metabolism (reaction 3) (and to a lesser extent, glycolysis) regenerates phosphocreatine from creatine by reversing reaction (2):

until resting levels of phosphocreatine and ATP are restored. That’s what the gasping for air is about.

Aerobic energy metabolism, like every other chemical reaction in life or in the test tube, also produces some heat. This isn’t wasted: together with the processes that regulate sweating, and piloerection (hair standing on end; what a great word!) and blood flow, it keeps us at 37ºC.

The relative speeds and scales of the energy-yielding systems in the muscle are:

At rest, the muscle cells of a trained athlete would contain sufficient ATP and phosphocreatine to sustain fast work for 1-2 seconds, and up to 10 seconds, respectively. Depending on his muscle phosphocreatine levels at rest, Usain Bolt might just complete the 100 meter sprint using these ‘high-energy twins’, but that’s not what happens; the metabolic controls in his muscle cells will already have started to provide glucose and break it down through the anaerobic energy metabolism of glycolysis during the 10 seconds of the race.

The rates of engagement of the different systems can be visualized as follows (phosphagen is an older term for phosphocreatine):

What about the sprinter?

Does a sprinter benefit from increasing his or her creatine and phosphocreatine levels by taking creatine supplement? The data are mixed. In 100 meter sprints, and others of a repetitive nature, which required recovery, there was a small improvement: the 100 meter time was improved by 0.8% (7). Enough to win rather than place. In other studies, creatine supplementation didn’t have any effect. There’s a nice summary of several such contrasting results at this site.

The author of the summary speculates that the mixed results are due to the slightly different sprint exercises engaged in. Also, creatine supplementation increases body weight, by one or two pounds, and this can’t be helpful in any activity involving propulsion (weightlifting, or fitness enhancement by high intensity workouts, would not be affected by a couple of extra pounds of weight).

What about the marathon?

For a high-level athletic activity that goes on for many minutes or even hours, like the marathon, everything depends on aerobic metabolism. That’s already evident from the figure above. Marathon performance depends on the rate of oxygen delivery to tissues, and the training and experience to balance the consumption of carbohydrate and fat for energy production. A marathoner who runs out of carbohydrate will ‘hit the wall’ — their speed will decline dramatically, and it will be a struggle even to stagger across the finish line (see my earlier post about this). Ideally, since carbohydrate can provide energy at a higher rate than fat, all of the carbs, those stored in the body before the race, and taken in during it, should be consumed as the race ends; fat is essentially an infinite source of energy, but that energy is provided more slowly than from carbohydrate, and depends on carbohydrate to be released.

It is estimated that the average ATP molecule in the body is broken down to ADP, which is then re-phosphorylated to ATP (mainly by oxidative energy metabolism), about 1000 – 1500 times a day. This amounts to recycling the body’s own weight of ATP.

Although I’m not aware that Usain Bolt took creatine supplements, he ate a lot of meat, which would provide creatine. At the Olympics in Beijing (where he also won the 100 meter sprint), he thrilled the owners of McDonald’s by claiming he’d consumed about 1000 chicken McNuggets during the Olympics. Sports nutritionists were undoubtedly shocked to hear of his unhealthy eating habits, but his muscle creatine levels were probably pretty high.

Creatine kinase is the enzyme that transfers the phosphate group from creatine phosphate to ADP, and from ATP back to creatine, reactions 2 and 4 above. Mice in which the gene for creatine kinase has been inactivated by genetic engineering do very little voluntary running (on the running wheel), have poor endurance, and their muscles are wasted (8). 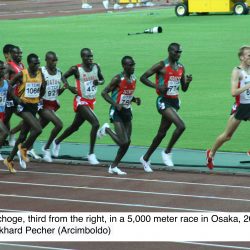 Running out of sugar and hitting the wall 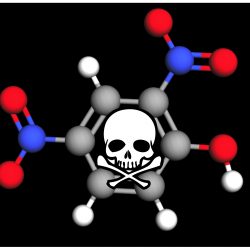 How DNP (dinitrophenol) kills you 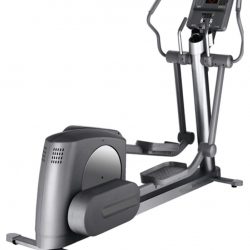 Human Energy: The Body in motion